What you can read on this page:

The Heartburn Center of South Texas provides cutting-edge diagnostic, treatment, and management services for patients with Barrett’s Esophagus and GERD. Our surgeons are highly-skilled in using the most advanced minimally invasive procedures and state-of-the-art technology to treat patients with reflux and Barrett’s Esophagus, preventing the development of esophageal cancer.

The treatment for Barrett’s Esophagus has been compared to the preventive treatment of colon cancer. Many lives have been saved by the removal of polyps in the colon before they progress into colon cancer. In a similar fashion, the development of esophageal cancer can be prevented with the removal of pre-cancerous cells and lesions in the lining of the esophagus. 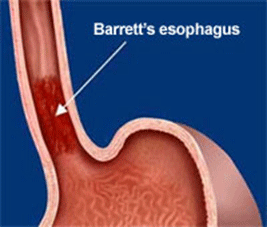 What is Barrett’s Esophagus?

Barrett’s Esophagus is recognized as a major risk factor for developing cancer of the esophagus and it develops in response to uncontrolled GERD. The esophagus carries food from the mouth to the stomach. The cells lining the esophagus differ from those lining the stomach. These cells become inflamed when exposed to acid repeatedly. Acid reflux then stimulates growth of stomach or intestinal-type cells in the esophageal lining. Once these abnormal cells are found in the esophagus, the condition is known as Barrett’s Esophagus. These cells can continue to change and can develop into a pre-malignant condition called dysplasia. Without treatment, dysplasia can lead to cancer of the esophagus.

Why is early detection important?

According to research studies performed at the National Institutes of Health, the incidence of esophageal cancer is increasing at an alarming rate. It is thought that esophageal cancer will become more prevalent than colon, breast, or prostate cancer in the years to come. The prognosis for patients with esophageal adenocarcinoma is poor, with only approximately 13 percent of patients surviving five years from the time of diagnosis. Esophageal cancer is usually diagnosed at an advanced stage, which makes treatment more difficult. That’s why regular monitoring for patients with Barrett’s Esophagus is so important because steps can be taken to prevent the progression to cancer.

What are the symptoms of Barrett’s Esophagus?

Many patients have no symptoms. The most common symptom is severe heartburn associated with reflux. Some patients with Barrett’s Esophagus notice an improvement in their symptoms of acid reflux because the new cells that formed in the esophageal lining resemble those of the stomach. These abnormal cells are more adaptive to withstanding injury from the acid, causing less GERD symptoms.

How do you diagnose Barrett’s Esophagus?

If you suffer from severe heartburn and GERD, you should be evaluated at the Heartburn Center of South Texas. Our physicians offer each patient a thorough evaluation to ensure that chronic reflux has not progressed to Barrett’s Esophagus.

An endoscopic examination of your esophagus is usually recommended (called an EGD). While you are sedated, a thin, fiberoptic flexible scope with a camera and light is placed into your throat and into your esophagus. Your physician will be able to view your esophagus using the endoscope. If the lining is red instead of light pink, Barrett’s Esophagus might be present. A definitive diagnosis is make by taking biopsies of abnormal tissue during the endoscopy using special instruments. These tissue samples will be examined under a microscope by a pathologist to check for abnormal cellular changes, which could indicate Barrett’s Esophagus or dysplasia.

What treatments are available?

In the past, if you were diagnosed with Barrett’s Esophagus, you would need to be monitored regularly with endoscopies and biopsies according to a schedule set by your gastroenterologist. Alternatively, technology has evolved so that your doctor may be able to actually remove the abnormal lining, so that the normal lining grows back. The Heartburn Center of South Texas offers a full spectrum of treatments for both acid reflux and Barrett’s Esophagus. Treating reflux does not always allow the Barrett’s Esophagus to go away so therapies must be aimed at both the acid reflux and the abnormal esophageal lining.

Lifestyle Changes
There are steps you can take to avoid acid reflux. These include not eating right before bedtime, avoiding tobacco, avoiding acid-producing foods, eating smaller meals, and losing weight if you are overweight.

Anti-Reflux Surgery
If lifestyle changes or medications do not prevent reflux, you may benefit from a procedure called fundoplication to augment the lower esophageal sphincter to prevent acid reflux. Surgeons at the Heartburn Center of South Texas are highly skilled in performing this minimally invasive laparoscopic procedure through several small incisions in the abdomen. A hiatal hernia is also repaired if one is present. Patients recuperate faster with minimally invasive surgery and are back to their normal activities within one or two weeks. Long-term medication to control GERD is usually not needed after this type of surgery.

Our surgeons also offer the latest in technologically advanced anti-reflux procedures including the Transoral Incisionless Fundoplication (TIF) and the LINX lower esophageal sphincter augmentation. The TIF procedure is performed without incisions to recreate an anti-reflux valve at the base of the esophagus. A suturing device is placed over an endoscope and the surgeon folds and secures the stomach to the esophagus under direct visualization. In this way, a fundoplication is created from the inside, without the use of incisions. Alternatively, the LINX device is a magnetic “bracelet” that is placed around the base of the esophagus laparoscopically (using small incisions) to aid the failing lower esophageal sphincter to prevent acid reflux. The magnets open when food is passed through the esophagus and then come back together after the food bolus is cleared, maintaining a tight lower esophageal sphincter resting pressure and preventing acid reflux. 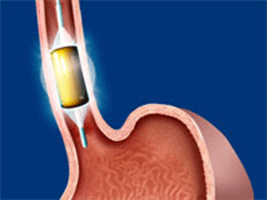 Radiofrequency Ablation
Radiofrequency ablation (RFA) is a new, safe procedure that destroys the abnormal esophageal lining in Barrett’s esophagus with heat energy. Our surgeons at the Heartburn Center of South Texas are experienced in using the state-of-the-art Barrx system to remove the abnormal lining. RFA is performed using standard endoscopy. A special catheter with a balloon tip is inserted around the Barrett’s segment and the harmful tissue is ablated. RFA is completely effective in eliminating the abnormal esophageal lining in 85 percent of patients, with minimal side effects. Following RFA, you will need to continue to control GERD so that normal cells can grow back in the lining of your esophagus. If not controlled, the abnormal lining may reappear.

Endoscopic Mucosal Resection
If during your endoscopy, your surgeon notices a nodule within the Barrett’s esophagus, he/she will remove it using a technique called endoscopic mucosal resection (EMR). Using special instruments, the physician suctions the nodule and then removes it with a small instrument. A pathologist will examine the nodule to determine if cancer is present.

Cancer Surgery
If cancerous cells or high-grade dysplasia is found within the Barrett’s Esophagus, your physician will most likely recommend that the lower portion of your esophagus be removed in a procedure called an esophagectomy. The extent of the surgery depends on where the cancer is located. If it is very early cancer, the procedure may be performed laparoscopically through small incisions in the abdomen. If it has spread to nearby tissue, lymph nodes may also need to be removed during a traditional “open” surgery.

For More Information
To learn more about Barrett’s Esophagus or to schedule an appointment with a physician who specializes in this condition, call the Heartburn Center of South Texas at 210-695-2757.

Barrett’s esophagus is a change in the lining of the esophagus (diseased esophagus left, normal esophagus right).

Patients with the first phase of Barrett’s esophagus (intestinal metaplasia) have a combined risk of 1.4% per year of progressing to high-grade dysplasia or cancer (“dysplasia” refers to abnormalities of a tissue or cell that make it more cancer-like and disorganized). While rare, cancer of the esophagus is the most rapidly rising cancer in the U.S. It is often incurable because it is frequently discovered at a late stage.